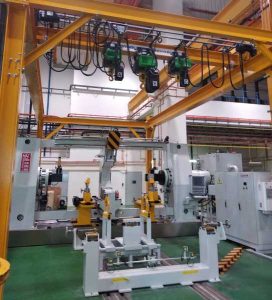 MRT depots constantly use cranes and hoists to ease the burden and increase productivity of lifting heavy loads.

MRT depots carry out a plethora of engineering & technical tasks. One of the most critical ones is the maintenance of axles which is to be done in a wheel press system.

In order to perform the maintenance work, train engineers need to heft and / or lower the axles with the help of a crane system. 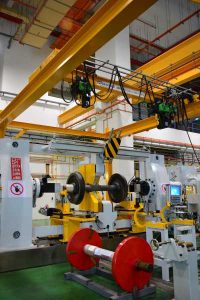 The hoists lift and/or lower the axles to the various jigs to facilitate the inspection and maintenance of the axle elements.

The rail engineer can use either hoist “B” by itself i.e. 3.2 ton or hoist “A” & “C” together i.e. 1.6t + 1.6t. These are controlled by a smart pendant switch which controls both lifting, cross travelling and long travelling.